The Braintree Section of Peth Road between the addresses of 1741 and 1809 will be closed on Monday and Tuesday, October 11th and 12th from 7 a.m. - 5 p.m. for the installation of a new culvert. Please plan to… Read More... 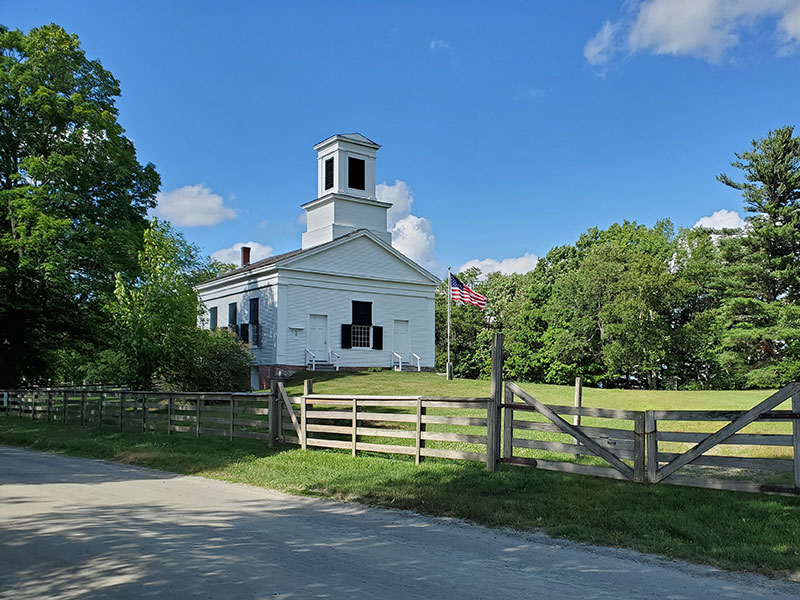 Built in 1845 and dedicated in 1846, the Braintree Hill Meeting House was erected to take the place of the town’s original meetinghouse built circa 1807. When the original meetinghouse was deemed too large for the town’s populace, an arrangement was made between the town and officials from the Congregational Church, whereby the old building was given to the church providing they build a new structure and allow town meetings to be held there. This arrangement lasted until 1936 when town meetings were moved to the West Braintree Town Hall.

By the 1880’s the church’s membership was shrinking and beginning in 1924, the building was used only once per year for Old Home Day service, (a tradition which continues today). With the death of the last member of the church in 1969, the structure became the property of the Vermont Congregational Conference. Subsequently, Braintree Historical Society Incorporated was formed and took ownership of the building and grounds. Today the society works to preserve and share the history of Braintree through a museum in the Meetinghouse’s basement as well as through occasional public programs and by carrying on the tradition of Old Home Day.

In recent years, the Braintree Hill Meetinghouse and grounds have become the home for a very popular series of events known as the “Braintree Bluegrass Brunches”, which have featured local music, local food vendors, farmers market stalls, kids activities and general community-building. Each of these events have brought 100’s of people to the Meetinghouse to support local vendors, musicians and farmers and to help raise money for the Braintree Historical Society. Additionally, the Meetinghouse hosts several weddings, receptions and family gatherings each year

To contact the Braintree Historical Society, you may email braintreevthistoricalsociety@gmail.com or call 802-728-6170